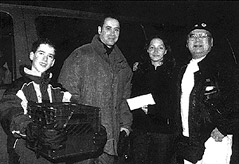 Ve’ahavta, a Jewish charitable organization, operates the van along with Na-Me-Res.

Providing basic necessities of life and preventing hypothermia among the estimated 200,000 homeless residents of Toronto are the immediate goals of the program. Their ultimate goal is to build trusting friendships and assist in the transition to a shelter, the first step to self-sufficiency.

Verdiroc staff and principals have participated in a number of community service days.

“The suggestion for community service projects come from our staff,” says Cary Green, v-p of development for Veridroc. “These have included sorting food at the Daily Bread Food Bank and building houses with Habitat for Humanity.

Green also presented a cheque to cover the cost of three evenings’ worth of supplies delivered by the van.

(In the picture – Gary Green of Verdiroc Development Corp. and son Daniel (left) present a cheque to Rachel Lasry of Ve’ahavta and Simon McNichol of the Native Men’s Residence in support of the Street Help Program.)